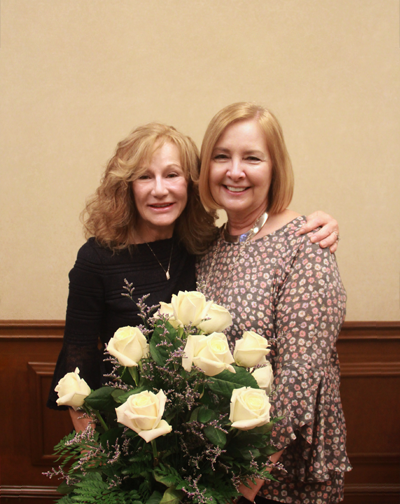 Julie Gustafson, a long-time coworker, says that Candy amassed an extensive amount of knowledge during her time at Royal Neighbors. “She experienced so many different work scenarios and led many major projects. She dedicated her working career to Royal Neighbors, making sure that work was done promptly and correctly. And while working and raising a family, she still found time to be involved in many varied volunteer activities, which is such a major part of Royal Neighbors.”

One of Candy’s greatest accomplishments through the years was leading the conversion of new business from the mainframe to a new insurance administration system. “I was part of the group that brought in vendors and selected a new administration system. Then I was charged with leading the entire conversion project, working cross-functionally with the IT Department to complete the project by our launch date in 1997,” said Candy. To this day, Royal Neighbors uses that same administration system – just one of many things Candy touched that will continue to benefit the Society after her retirement.

“She will be greatly missed,” says Julie, “not only for her business knowledge, but for her leadership skills and her caring nature for her fellow employees.”

About Royal Neighbors of America

Royal Neighbors of America is a unique provider of life insurance and annuities whose mission is to protect women financially and empower them to improve their lives, families, and communities. Royal Neighbors was founded as a membership organization in 1895 by nine pioneering women who recognized the need to insure the lives of women and children. Today, with headquarters in Rock Island, Illinois, and an operation in Mesa, Arizona, Royal Neighbors delivered over $14 million of Social Good in 2017 and serves over 200,000 members. For more information and to become a member of Royal Neighbors, visit us at www.royalneighbors.org.