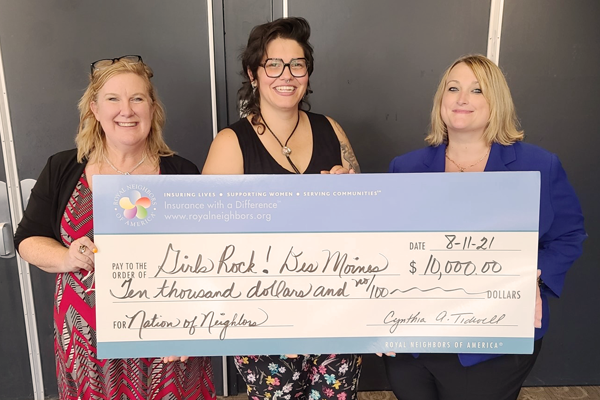 Rock Island, Ill. (Aug. 11, 2021) – Royal Neighbors of America, one of the largest and first women-led insurance organizations in the US, located in Rock Island, Ill., has announced that Rachel Gulick (they/them), a founding volunteer and current executive director of Girls Rock! Des Moines (GR!DSM) has been presented with one of ten Nation of Neighbors℠ empowerment awards and grants presented nationwide. In addition to the award, they received a $10,000 grant for their organization.

GR!DSM is a non-profit music education program that empowers girls and gender-expansive folx through creative expression. According to Women’s Audio Mission (WAM), women and girls’ enrollment in STEM (science, technology, engineering, and math) has declined 70% since the year 2000. Gulick says GR!DSM plans to use the grant funds to provide a new tech director and curriculum, making careers in STEM and audio engineering more accessible to women and girls.

“I have often said that what we do at Girls Rock! DSM is neither magic nor make-believe, we simply foster belief in oneself,” says Gulick. “I think that’s pretty powerful work,” they added. The organization has empowered hundreds of girls, gender-expansive, nonbinary, and trans youth through music education, innovative workshops, and performance opportunities since it’s conception in 2013.

Royal Neighbors’ Regional Sales Account Manager Michelle Hilliker, presented the award to Gulick. “For more than 125 years, Royal Neighbors has sought to empower women to make a positive impact in their communities. Rachel Gulick has dedicated themself to leveraging their experience and passion for music education, intersectional feminism, social justice, equity and liberation to elevate and empower women and girls in their community. We support Gulick’s mission to build and grow a sustainable tech program because we also understand how crucial it is to build up women’s representation in music, science, technology, engineering, and math.”

This grant brings to $30,000 Royal Neighbors has awarded to central Iowa non-profits as part of its Nation of Neighbors program to recognize nominated individuals who have a plan to start or expand a business, organization, program, or nonprofit that helps women and/or girls in their community. Two other winners in Guthrie Center and Vincent, won national grants this week for their efforts to combat sex trafficking as well as homelessness in central Iowa. To date, nearly $2.5 million has been awarded nationwide.