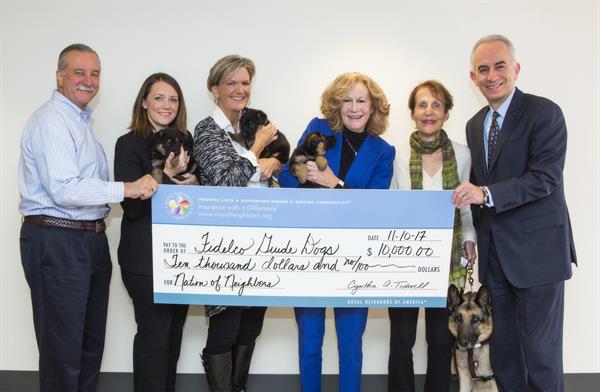 Focused on its history of empowering women, the Nation of Neighbors Program has awarded nearly $1.8 million nationwide since 2007. Each year, Royal Neighbors members and insurance sales agents across the country are asked to nominate individuals they know who plan to start or expand a business or an organization that helps women and girls. A panel reviews each nomination and determines the recipients and the monetary amounts awarded.

Fidelco breeds, raises, trains, and places guide dogs for a wide variety of blind and visually impaired people including business leaders, wounded war heroes, teachers, athletes, mountain climbers, busy parents, and retirees. “Fidelco Guide Dogs is honored to receive this important, first-time $10,000 grant from Royal Neighbors of America. We appreciate their support of our charitable mission that creates life-changing partnerships with our clients who are blind,” said Mr. Russman. “We’re delighted to direct this grant to support and empower our current female clients who serve their communities as teachers and advocates, and who have served at the highest level of national government; as well as future clients who will be able to realize increased independence and mobility with a Fidelco Guide Dog partner leading her way.

About Fidelco Guide Dogs
Founded in 1960, with operations in Connecticut and clients living across North America, Fidelco Guide Dog Foundation is a 501(c)(3) nonprofit that partners exceptional men and women who are blind with its elite-bred German Shepherd Guide Dogs, providing all clients with increased independence to improve their lives and the world around them. It takes two years, 15,000 hours, and $45,000 to create every guide dog. All Fidelco Guide Dogs are given to clients at no cost and includes 24/7 client services for the life of the team, typically 10 years. Fidelco Guide Dogs pioneered In-community Placement in the USA, with over 1,500 guide dog placements occurring in clients’ home communities in 41 states and six Canadian provinces.