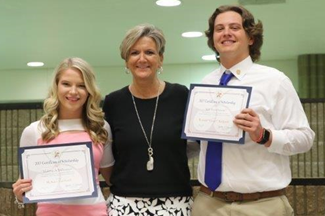 Darcy Smith, Royal Neighbors’ Member Engagement Specialist, is shown with McKara Caldwell, at left, and Grant Redpath, at right, both of whom were awarded scholarships from Royal Neighbors.
(Rock Island, IL) – At the end of 2016, the total outstanding student loan debt was over $1 trillion. Who should pay for college, parents or students? It’s a familiar question but one with a variety of answers.

Twenty-seven members are receiving grants worth over $172,000 to help them with their continuing education. Since the program’s inception, more than $5 million has been awarded to young scholars graduating from high school as well as to non-traditional-aged students who are looking for new experiences and challenges.

Pranjal Kadwe, a graduating senior at Moline High School in Moline, IL, received the Making A Difference Leader Scholarship from Royal Neighbors. This is the top award presented to the most outstanding female high school senior from the pool of qualified Making A Difference applicants. She will receive a four-year, renewable grant up to $20,000 ($5,000 each year) for tuition or educational expenses to pursue a degree at an accredited college or university.

Courtney Young from Parker, CO, received Royal Neighbors’ New Horizons Leader Scholarship. She will receive a renewable grant worth up to $20,000 ($5,000 each year). This scholarship is awarded annually to the most outstanding female from the pool of qualified New Horizons applicants.

The New Horizons Scholarship is awarded annually to help members age 18 and older who have previously graduated from high school pursue a degree at an accredited college or university. The scholarship funds can also be used toward an advanced degree such as a Masters, Ph.D., law school, or medical school.

“Member benefits are provided at the discretion of Royal Neighbors of America and are not available in all states. Member benefits are not part of any insurance or annuity contract and are not guaranteed. Insurance and annuity products should not be purchased for eligibility or maintenance of nonguaranteed membership benefits. These products should only be purchased if they meet the financial needs of the applicant.”