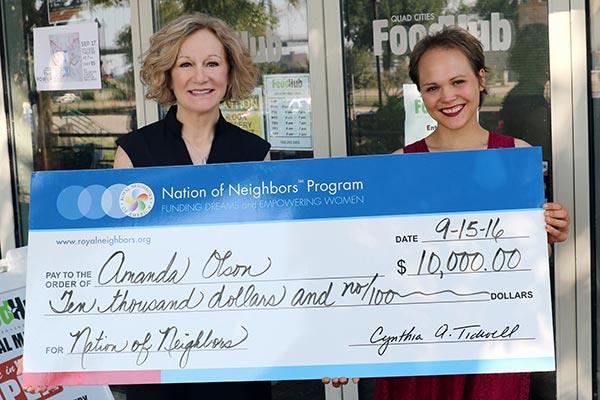 (Rock Island, IL) -- Cynthia Tidwell, president/CEO of Royal Neighbors, at left, presents Amanda Olson with a Nation of Neighbors check for $10,000 to complete her Mad Roots Urban Aquaponics farm, a system for growing and harvesting food that is done without soil and fertilizer.


About Amanda’s Project
Olson’s goal is to make healthy food affordable and plentiful while educating consumers on ways they can take care of their own health. She will be setting up her aquaponics farm in Moline, IL.

About Nation of Neighbors
Nation of Neighbors provides support to help empower individuals to reach new goals, especially those who have a plan to start or expand a business or an organization/group that helps women and girls in their community. Ten grants of $10,000 each are being awarded across the U.S. in 2016. More than $1.7 million has been awarded since the program was launched in 2007.

About Royal Neighbors
Royal Neighbors of America, one of the nation's largest women-led insurers, empowers women to meet the needs of their families with annuities and life insurance products such as whole life, simplified issue, and universal life. Royal Neighbors was founded in 1895 and is headquartered in Rock Island, IL, with a branch office in Mesa, AZ. For more information, visit www.royalneighbors.org or call (800) 627-4762. Royal Neighbors is licensed in 43 states and the District of Columbia and not all products are available in all states.